An evaluation of the Yaoundé Architecture, by GoGMI 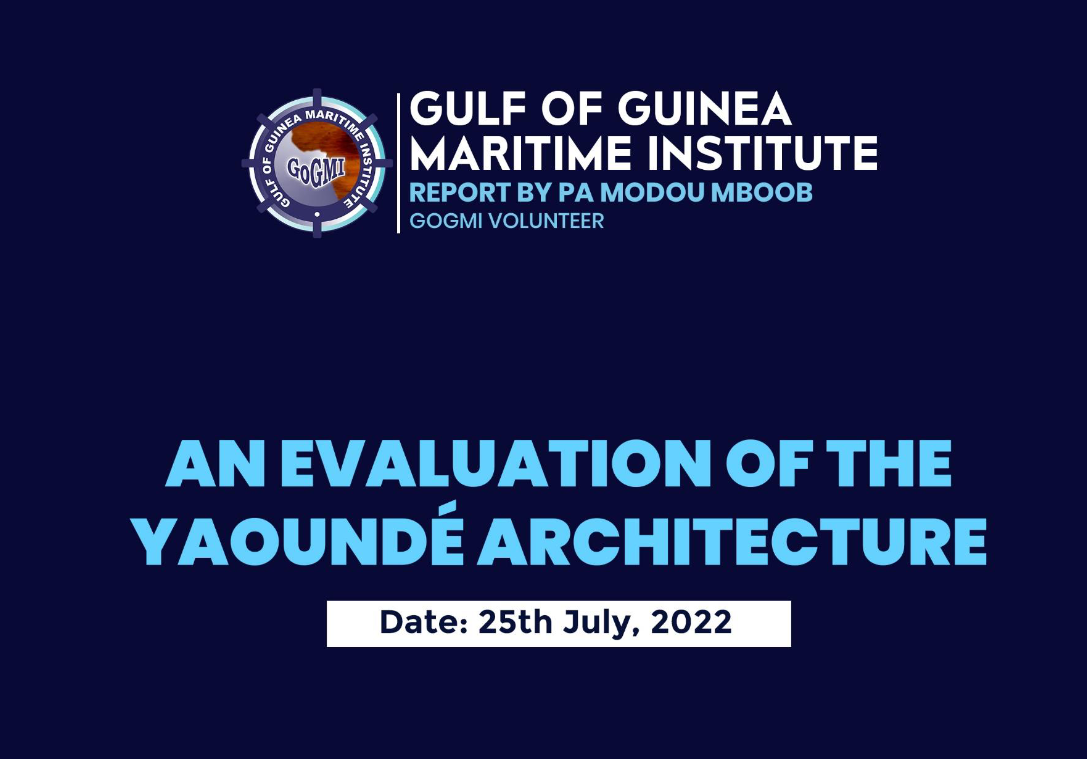 The thoughts and content of the report do not in any way represent the ideas, opinions or views of the Gambia Armed Forces or the Gulf of Guinea Maritime Institute.

The Gulf of Guinea has been a piracy hotbed for about a decade, recording the most instances worldwide. In addition, the region is plagued by numerous maritime security threats, such as human trafficking, illegal drug trafficking, and weapon smuggling, and illegal, unreported, and unregulated (IUU) fishing that prevents secure, safe, and commercial use of the sea. The transborder personae of these crimes necessitate regional cooperation to confront, requisitioning the creation of the Yaoundé Architecture as a cooperative framework to do so.

The “Code of Conduct Concerning the Prevention and Repression of Piracy, Armed Robbery against Ships, and Illegal Maritime Activities in West and Central Africa”, also known as the Yaoundé Code of Conduct (YCoC), was adopted in 2013 the Economic Community of Central African States (ECCAS), the Economic Community of West African States (ECOWAS), and the Gulf of Guinea Commission (GGC), at a summit on maritime security in the Gulf of Guinea. The objective of the Code of Conduct is to enhance cooperation among signatory states in the fight against transnational organized crime in the maritime domain through a regional framework known as the Yaoundé Architecture (YA).

By encouraging information sharing, coordinating operations through joint patrols, harmonizing legislation, and essentially acting as a platform for the implementation of the Code of Conduct’s provisions, the YA aims to improve collaboration. The YA is divided into various levels, from strategic to tactical, each with a different role in preventing illegal maritime activity in the region. The Interregional Coordination Centre (ICC), which coordinates and shares information among the Regional Maritime Security Centre for West Africa (CRESMAO) and the Regional Maritime Security Centre for Central Africa (CRESMAC), makes up the strategic layer of YA. The maritime sphere is divided into five operational zones, each with a separate Maritime Multinational Coordination Center (MMCC). At the state level, Maritime Operational Centers (MOC) act as a hub for bringing together the different stakeholders in charge of state activity at sea.

It will be challenging to link the drop in piracy or any other crime to the YA due to the numerous actors involved in maintaining maritime security in the Gulf of Guinea. Therefore, to assess the Architecture’s progress, the report evaluated the progress made over the previous years in carrying out its fundamental mandates, such as information sharing, effort coordination, and strengthening regulations to meticulously address the maritime security challenges in the region.

The YARIS network, an information-sharing tool, connects all layers of the security framework, enabling consistent cooperation, surveillance, expeditious information exchange, and uniformity of operation within the framework. This is supplemented by the Gulf of Guinea Maritime Collaboration Forum and Shared Awareness and De-confliction (GoG-MCF/SHADE), which promotes communication and information sharing among regional and international stakeholders.

The establishment of the Yaoundé Architecture has resulted in some successful maritime crime interventions in the region. These operations have demonstrated how the YA’s key values—capacity building, joint operations, information sharing, and coordination across the naval forces of the region is vital in keeping maritime law and order. The Gulf of Guinea (GoG) states must enact national laws that allow for the prosecution of offenders to guarantee a long-lasting victory over maritime criminals. Even though there is still much to be done in this area, several of the code’s signatories have made progress in developing and enforcing
domestic legislation to prosecute maritime crimes, notably piracy and armed robbery. Though the YA has made some strides since it was first developed, the architecture is yet to be fully actualized. The report found that, in addition to the economic effects of the Covid-19 pandemic on member states’ financial contributions, a lack of political will is the primary obstacle to the Yaoundé Architecture’s effectiveness. This has resulted in the underfunding of maritime agencies in member states, and the delay in implementing legal reforms in their judicial systems to accommodate maritime laws. These two are critical in the fight against maritime crime because they harmonize the collaborative efforts by bridging the capability gap between states and the legal loopholes in the region.

Making the Code of Conduct a legally binding agreement, as the report suggests, might solve the problem of political unwillingness in ensuring that the objectives of the framework are met. On the other hand, in the quest to sustain maritime security in the Gulf of Guinea, besides a repressive approach, cooperation on good governance measures should be encouraged among the GoG states to solve factors onshore that eventually spill over to maritime domain.