How naval forces can contribute to maritime stability and security? 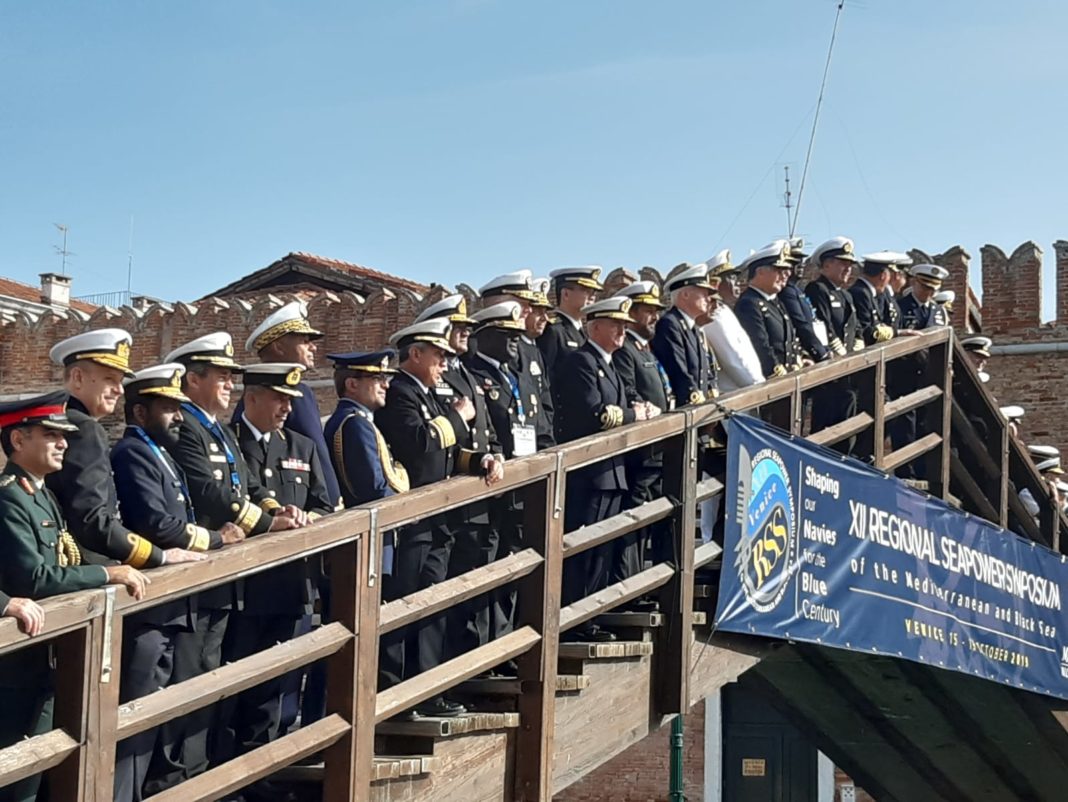 Bertrand Demez, GoGIN project coordinator, attended the 12th Regional Seapower Symposium, organised by the Italian Navy within the Venice arsenal from October 15th to 18th 2019.  The theme was:

Navies beyond traditional roles: crewing efforts to project stability and security from the sea.

International Forum for Naval Chiefs of Staff, 35 worldwide navies were represented covering the maritime domains of Asia, North and South America, the Middle East and for the first time sub-Sharan Africa with the participation of Angola, Nigeria, the Ivory Coast, Congo, Cameroon and ICC.

The opening speeches held by the Italian authorities (Navy Chief of staff and Army Chief of staff) and the sponsors (Fincantieri, Leonardo) associated operational and industrial issues: evolution of maritime threats and operations, technically relevant responses. The symposium was conducted around three working sessions, led by expert panellists.

First working session: “The International law of the sea from Montego Bay to a new Model. The impact on Navies and others”.

All stakeholders agreed that the international Convention on the “Law of the Sea” (UNCLOS) ratified more than 40 years ago by 85% of countries (to be noted that the USA are amongst the 15% of non-signatories) enables a legal management of maritime domains based on the EEZ principal, the rights and duties of the Flag States and an international legal framework.

Nevertheless, the maritime world has since evolved. Emerging States are failing in the surveillance of their EEZs. Globalisation has generated a kind of maritime protectionism from some countries. Only cases of piracy, slave trading and unauthorized radio transmissions are explicitly acknowledged by the Convention, where as other illicit activities (fishing, illegal immigration, drug and arms trafficking) are becoming increasingly problematic. Technology has advanced yet the status of drones and other autonomous devices is not explicitly foreseen in the convention. Finally, the issue of the High Seas (beyond EEZ) is increasingly sensitive, namely because of the exploitation of submarine resources.

All these new « parameters » need to be taken into account within a revised international framework. Currently in the absence of such a framework, they are dealt with on a case-by-case basis requiring an indispensable cooperation between States, long and laborious to set up.

During this panel, the ICC shared a comprehensive panorama of Yaoundé Architecture and underlined the support received by international partners (including UNODC for legal assistance).

Second working session: “Shaping our Navies looking at the blue growth. New capabilities and traditional roles. How to find the right balance between low and high end.”

All parties underlined the growing significance of Maritime domains within the global economy. All countries are dependent on maritime activity (importation/exportation, internet…). Hence, it is crucial to be able to ensure free and secure movement and navigation at sea. This is the duty of naval forces. However, despite technological developments, it’s unrealistic to believe that each country has full intervention capacities (safety of life and property, surveillance and control of maritime activities, crisis management, armed conflicts, etc). Maritime security can only be ensured via regional, interregional or international cooperation (optimised information sharing, joint intervention capabilities). Some countries, like Israel, emphasized the need to be more offensive in addressing the growing threats impacting maritime domains.

Finally, the representant of the Italian shipowners stated his concerns on the maritime insecurity in west Africa. This situation has economic consequences : “An insecure sea is an expensive sea”, it is crucial to ensure the security of the commercial fleets.

Third working session: “The evolution of the sea power in the blue century. The maritime domain as a key enabler to enhance resilience. Challenges and opportunities.”

Each military speaker stressed that their country was acting to ensure a “Sure, free and open” maritime domain. To illustrate stepping up maritime safety, it is to be noted that the representant of China gave the example of the construction of many lighthouses and lifesaving stations in the China Sea.

Within this panel, the need for a close cooperation between the Navies was once more stressed.

Edward Luttwak indicated that naval diplomacy has marked worldwide maritime history. Absence of cooperation systematically resulted in failure. He equally underlined that the concept of Maritime Power could run counter the one of Sea Power (a nations capacity to extend military power onto the seas). These are two principles that can be sources of tensions when wrongly used/interpreted.

All parties thanked the Italian Navy for the quality of the organisation and hosting. The discussions demonstrated shared concerns and willingness of all Navies to cooperate in order to make the maritime domain more secure: Better cooperation, better coordination and information sharing.

Some stakeholders observed the poor representation of the private sector (exception made of some Italian agencies) and that their inter-agency part was scarcely covered (except the Italian Coast Guard one). Bringing together Marines of all geopolitical horizons, the symposium will most certainly develop in this direction. An example of « naval diplomacy ».