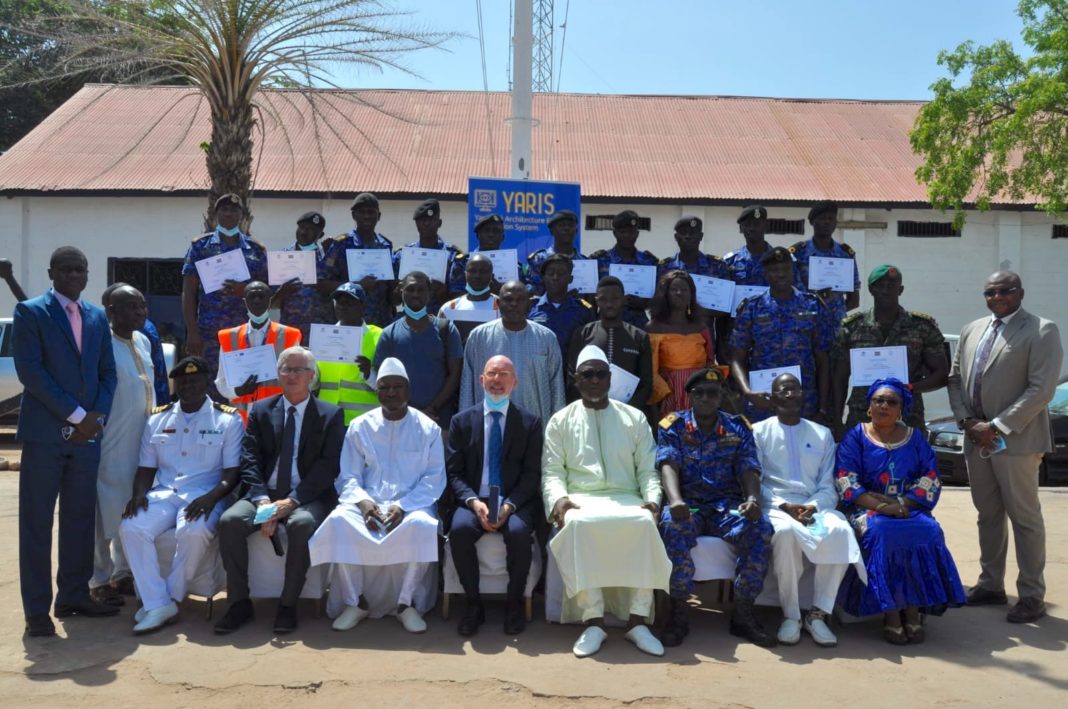 [Banjul 2 July 2021] The Minister of Defence of the Republic of the Gambia, H. E. Amb. Sheik Omar Faye chaired the closing ceremony of the YARIS platform (Yaoundé Architecture Regional Information System) advanced training programme, in the presence of the EU Ambassador to the Gambia, H.E. Corrado Pampaloni and high representatives of maritime stakeholders. The graduation ceremony was held at the Gambia Navy’s naval command and fleet base in Banjul, on the 2nd of July at 9:00 am.

In the Gambia, due to the lack of a National Maritime Operations Center (MOC) at the national level, the Gambia Navy assumes the roles and responsibilities of a National MOC to ensure maritime safety and security in the country’s waters alongside its traditional mandate. Furthermore, owing to the multidimensional nature of maritime safety and security, the MOC collaborates with the key maritime stakeholders in the country to increase the Monitoring, Control and Surveillance (MCS) capabilities of its joint mandates.

The Captain Ebou Touray, Head of MOC Banjul, stated that

“The YARIS system has provided the platform for the country to prioritise and converge its maritime players under one umbrella, which has been lacking before. This initiative has cemented the need for maritime stakeholders in the Gambia to work collectively within well-structured operational procedures to coordinate national actions pertaining to the maritime domain.

He is adding that : “Moreover, despite the inadequacy of naval platforms and equipment, which greatly hinders our capacity to be at sea at all times, the YARIS system offers the possibility of increased effective knowledge of our operational environment through surveillance and analysis. This gives us the operational advantage of doing more with less.”

The aim of this in-person training is to allow centre staff to use YARIS in an operational context. In the case of these five centres in The Gambia, the focus was on both presenting the host of system functionalities whilst also supporting centres to embed this tool within their own operating procedures. Participants were given fictional scenarios on different themes (fight against maritime pollution, illegal fisheries…) to practice sharing situations, appropriating YARIS, and measuring its performance in daily missions.

In the coming months this personalised support will be rolled out by a mixed pool of trainers (GoGIN and Yaoundé Architecture centres) in Angola, Liberia, Nigeria, RDC, Sierra Leone, Togo as well as in MMCC Zone E; in addition, the YARIS platform will be used as primary communication tool during the forthcoming French-led African Grand Nemo exercise.