The maritime agencies of Guinea are connected to the YARIS platform 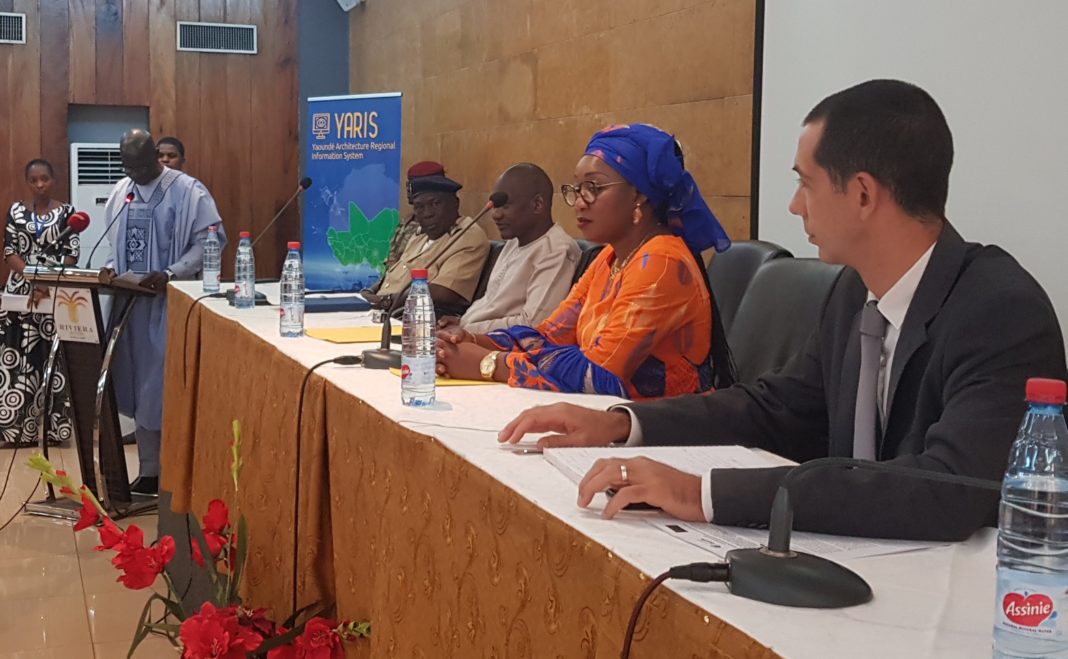 On May 13th 2022, the Minister Delegate in charge of National Defence, retired General Aboubacar Camara, presided over the closing ceremony of the training programme on how to use the YARIS platform (Yaoundé Architecture Regional Information System), in the presence of the Minister of Fisheries, Aquaculture and Maritime Economy, the representative of the European Union and the authorities in charge of the State’s action at sea.
After this 15-day training session, organised jointly by the Maritime Prefecture and the European GoGIN+ project, the national YARIS network will connect maritime agencies. Download the press release.

Guinea has set up a coordinated organisation to manage the State’s action at sea, under the responsibility of the Maritime Prefecture, headed by the Maritime Prefect, Captain Mohamed Camara. The prefecture hosts the Guinean Maritime Operations Centre (MOC) which is staffed with operators from the various administrations involved in the maritime sector (Merchant Navy, Customs, Police, Fisheries, Environment, Justice, etc.), this inter-agency organisation ensures better coordination of operations at sea.

These agencies are now connected within a national YARIS network, which means they are able to use a unique and secure tool to prepare and conduct maritime safety and security operations, from routine situations to crisis situations. Read more about Yaris.

National training on Yaris in Guinea

From 2nd to 13th May, 12 operational managers and 15 operators received advanced training at YARIS, delivered by a mixed team of four GoGIN+ and YA trainers (ICC and MMCC Zone D). In addition to mastering the main functionalities, participants were able to train in the coordination and conduct of operations on fictitious scenarios for combating illegal fishing, vessels in difficulty and miscellaneous trafficking. After this modular training, the operational centres were connected to the national YARIS network: Maritime Prefecture (Maritime Operations Centre, reference centre within the framework of the Yaoundé Architecture), Navy Operations Office, Air Force Operations Office, National Fisheries Surveillance Centre, Port of Conakry Lookout and National Directorate of the Merchant Navy. The other administrations will be connected soon.

The Maritime Law and Operations Officer at the Maritime Prefecture’s MOC, Cdr Ibrahima Bah, stated: “The YARIS information sharing platform has strengthened the implementation of the National Strategy for State Action at Sea in the Republic of Guinea. In the event of an incident at sea or a crisis situation, this tool will allow information to be shared securely, in record time, with all operators involved. There is little point safeguarding the national maritime domain if there is no coherent and secure framework for exchanging maritime information and coordinating the various civil and military administrations engaged in State action at sea connected to the maritime security centres of the Gulf of Guinea and their international partners.”

The European Union Ambassador to Guinea, H.E. Mr Josep COLL, said: “The GoGIN project and this course in particular have strengthened the capacities of the Guinean maritime prefecture and the various agencies involved in the State’s action at sea. These agencies are now connected to each other through the Yaris system, to exchange information and better coordinate their actions. This will improve the fight against maritime crimes (trafficking, illegal fishing, armed robbery) in order to promote the blue economy”.